We are very strict with our Black Angus, they have to meet the same criteria as our Murray Greys. They must be structurally correct and moderate framed with good growth, mothering ability, udders, fertility, longevity, and carcass. Calving ease and an excellent disposition are an absolute must! We have gone to some of the high performing ranches in Idaho to buy our Angus cows, including 101 Ranch, Jensen Angus, and Cordingly Angus. Most years we strictly use Artificial Insemination on the Black Angus, using some of the top bulls in the nation. 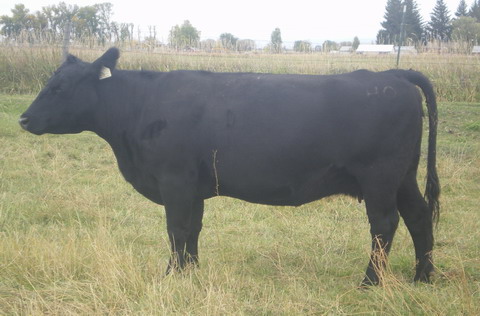 80L is a moderate framed, long bodied, functional cow with a good udder and an exceptianally good temperament. Her pedigree goes back to GDAR Traveler 71, VDAR Cornhusker 461, and Pine Drive Big Sky.  She gives us a growthy, balanced, and classy calf every year, and her daughters have gone on to do the same. 80L is shown here at six years old. 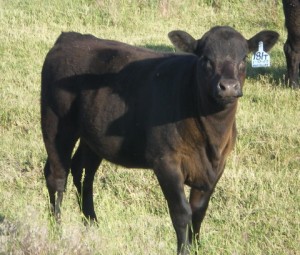 181T is our 2007 heifer calf out of 80L (featured above) and  Connealy Freightliner.  Freightliner is an extremely long bodied, well balanced bull who is known for his exceptional females. He is also the scrotal king, ranking as the highest EPD scrotal bull in the Angus breed. His get are known to grow very well, his sons have broken records at feed tests all over the country. 181T was born at 65 lbs. She is shown here at 5 months old. 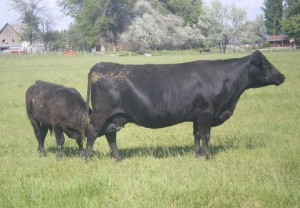 CA Miss Fame 146
146 is a moderate framed, functional cow that has proven herself time and again to be a great producer. We bought her from Cordingly Angus as a yearling heifer and we have been very pleased with her and her calves. She has proven herself year after year to be one of our top cows. She is a great-grandaughter of SAF Fame and also has GDAR Traveler 71, Hoff Hi Flyer, and Rito 3W3 in her pedigree. 146 is structurally correct, long, and deep, with a good spring of rib. She is shown here at seven years old with her son, HD 505U, a five month old bull sired by Conneally Thunder. 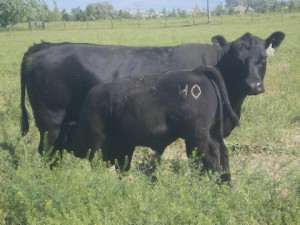 Jensen Traveler 288  (tag #82L)
82L is another nice cow that we got from Jensen Angus. She is line-bred GDAR Traveler 71 and also has Pine Drive Big Sky in her pedigree. She is one of our smaller framed Angus, but always weans off one of the biggest calves every year. She is a long bodied, structurally correct cow with lots of capacity. She is shown here at seven years old with her 2008 calf, HD 513U, a 4 1/2 month old bull sired by Neutron. 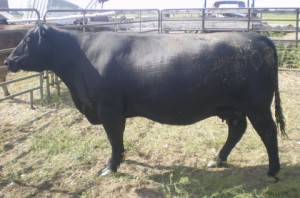 112N is a 2003 daughter of 82L (featured above) and Future Direction. Future Direction was the second most used Angus Bull in the United States for several years, and would have continued to be, but he was unable to produce enough semen. His semen currently sells for $300/straw and is still in high demand. His mother sold for $80,000 at the first ever Genex Influence Production Sale. 112N is a moderate framed, deep, thick, and long cow with an excellent temperament. She has given us some very nice calves and has tested negative for the AM Mutation. She is shown here at five years old. 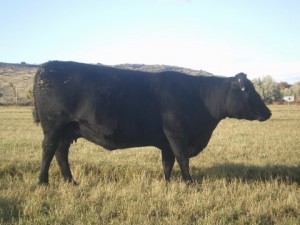 150R is a 2005 daughter of 112N (featured above) and Bon View New Design 1407, a very well known bull in the Angus breed. Crossing 1407 on the Future Direction daughters has been a particularly popular cross. We have been very happy with 150R. She is long, thick, and has a nice temperament. She is shown here at four years old. 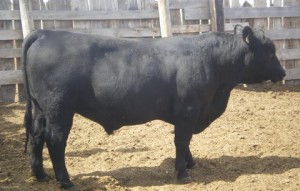 This is the first Black Angus bull we have owned. We usually strictly use only Artificial Insemination, but when we saw this bull we just had to have him.  We bought this yearling bull from Chad Neilson in Rexburg, ID. He is a son of Bando 5175 and out of an Ultravox daughter. He is a moderate framed, long bodied, well muscled, deep bull with a very nice temperament that he passes on to his calves. We have been very pleased with his calves. 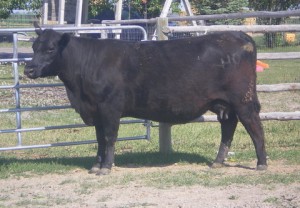 We bought 514 as a heifer from Double JJ Cattle in Shelley, Idaho. She is a Traveler 004 daughter and also has Scotch Cap and Bando 598 on her papers. Traveler 004 ws the #1 Registration Sire of 2007, almost double of any other Angus bull in the breed for progeny registered. He is known for easy fleshing daughters with superior udder quality and abundant milk.  514 is moderately framed, long, and thick with a good udder. She is pictured here as a three year old.