Murray Grey cattle are Australia’s own breed of cattle. Developed in 1905 on the Thologolong property of Peter Sutherland, they appeared when a particular roan Shorthorn cow was bred to various Aberdeen Angus bulls. Because Mrs. Eva Sutherland liked these grey calves, her husband didn’t slaughter them, although he feared they would reflect poorly on his Black Angus herd. 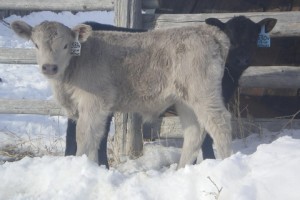 When her husband died in 1929, Mrs. Sutherland sold the herd of Greys to her cousin, Helen Sutherland, who started a systematic breeding of eight cows and four bulls. It soon became apparent that these odd cattle grew quickly, were superior converters of feed, and possessed carcass merit. Local cattlemen were attracted to the Grey’s size and appearance, and breeder after breeder turned to them. In 1962 fifty breeders banded together to form the Murray Grey Beef Cattle Society of Australia. The advent of the Society was the signal for the growth and development of the breed, which is unparalleled in Australia, and perhaps the world, in the 20th Century. Murray Greys are now the second largest breed in Australia and one of the fastest growing beef breeds in the United States.

Varying in shades of gray from silver to black, Murray Greys are naturally polled and tend to pass this on to over 90% of their progeny when bred to horned cattle. From their Angus ancestors they inherited dark skin pigmentation and are not susceptible to skin or eye problems. They have proved hardy and adaptable to most climates and can be found in all terrains and heat variances. Murray Grey calves are small at birth, typically between 60 and 80 lbs. They are easily calved, nurse quickly, and grow well. A typical Murray Grey cow weans off a calf that is at least 50% of her own body weight at 205 days. The cows are excellent mothers with good udders that stay intact without breaking down or developing bottle teats. Bulls and cows both are noted for their early maturity and high fertility. Bulls are known for their large scrotal circumference and the ability to cover many cows. Cows rebreed quickly after calving and it is not uncommon for cows to live to be 15 years or older, producing a good calf every year. 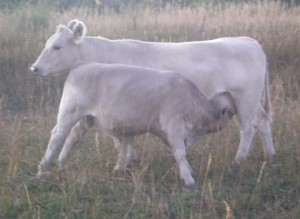 The gentle nature of the Murray Greys makes them a favorite for cow/calf producers and feedlots alike. They are quiet, easily handled cattle. They handle stress, adapt to new environments, settle quickly, and quietly get on with the job of converting feed into quality beef. Murray Greys carry the genetics to produce marbled beef on grass or grain, without the excess subcutaneous or intramuscular seam fat of some other breeds. Steers are very efficient, finishing in half the time and on half the feed as most other breeds. They have exceptional dressing percentages and high yields. A recent study in the United States showed that Murray Grey steers have a 12% larger rib eye area than the average US beef steer. Murray Grey steers were also twice as likely to grade Choice or Prime than the average steer. People everywhere are finding out that whatever the season, whatever the reason, Murray Greys are always in demand!