Developed in Australia, Murray Greys were not bred to pull plows or make cheese. They were developed by commercial cattlemen to produce the best quality of beef by the most economical methods possible, and to produce it in both good times and bad times. The developers of Murray Greys demanded these attributes in their cattle and today people around the world are enjoying the rewards. 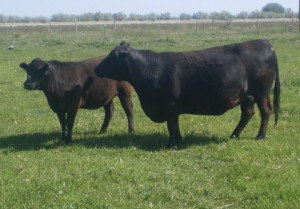 Famous for their excellent carcass, Murray Greys are one of the two preferred breeds for overseas markets such as Japan and Korea. They are renowned as easy care cattle that combine calving ease with good growth, carcass, and a gentle disposition. They finish equally well on grass or in the feedlots and are preferred by butchers and restaurants because or their consistent quality and tenderness. Murray Greys dominate carcass competitions around the world, and their success in such competitions has become legendary. At the Sterling Silver Carcass Competion in Calgary, Alberta, Canada, Murray Greys have won three of the past four years, and have placed in the top three places all of the past four years. In the 2003 competition only eight out of 63 steers met Sterling Silver Standard, which is AAA30 and above. Of those eight steers four of them were Murray Greys.

Murray Greys are also efficient for the producer. Steers finish in half the time and on half the feed over most other breeds. They have exceptional dressing percentages and high yields. A recent study in the United States showed that Murray Grey steers were also twice as likely to grade Choice or Prime than the average steer because of their excellent marbling without excess subcutaneous or intramuscular seam fat. Murray Greys are one of the few breeds that are high in marbling and still retain their ability to flesh easily and efficiently. Their quiet temperament assures optimal pH levels which lead to excellent meat color, taste, and tenderness. Jim Barby, a purebred breeder from Canada, says this about temperament, “the temperament of an animal makes a big difference in finish time and taste of the meat. If they are not in a state of stress all the time they do not need extra feed to make up for what they work off. Also, an animal that is under stress when it’s slaughtered will more likely be a dark cutter.” 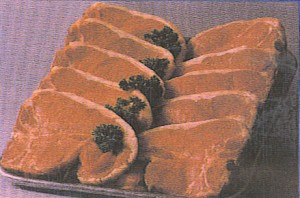 Perhaps more important than anything else is the Murray Greys ability to produce tender beef. A team of Beef Industry representatives participating in the 2001 National Beef Quality Audit named inadequate tenderness among the top three quality challenges facing the beef industry. While this was once thought to be related to diet, it is becoming increasingly clear that it is related more to genetics. DNA tests have become very popular in locating animals with the genetics to produce tender meat because they are not affected by an animal’s age, sex, management system, feeding level, or geographical location.

According to GeneSTAR testing, Murray Grey cattle carry more of the genetics that lead to tender beef than any other breed tested so far under their test. The test results show that 30% of Murray Grey cattle tested for tenderness 2 (T2) gene marker have tested two out of two stars (two copies of the gene) since the test was introduced. Angus is the next highest breed with 8%. Other breeds such as Shorthorn, Wagyu, Charolais, and Simmental have few or no animals with two copies of the marker. Murray Greys have similar levels of animals with one copy of the T2 marker to Angus (which is 50%), however, only 20% of Murray Greys have no marker compared to 43% of Angus. Gary Buller, manager of the well known Monterey Stud in Australia and President of the Murray Grey Beef Cattle Society stated, “Murray Greys are not only a quiet, high yielding breed, but now objective scientific testing proves the breed’s genetics are significantly more likely to produce tender beef than any other breed. Gone are the days of producing a mountain of semi-edible meat. Today’s consumers demand consistently tender beef or they spend their shopping dollars on alternatives such as pork or chicken. There is a huge potential to improve the eating quality/tenderness of beef by infusing Murray Grey genetics into commercial breeding programs.”

Another benefit of Murray Greys are that they are the right size for today’s market, with steers finishing out at 1150 to 1350 lbs. Dr. Allen Williams, a niche market meat consultant, said contrary to popular belief, larger cattle do not necessarily have a better cutout. He said that a high yielding carcass is easier to produce on a moderate sized animal than a larger one. 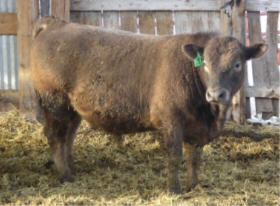 “We don’t need big to have a lot of me.” Williams also said that an economic study by Mississippi State discovered that as mature cow weight declined by 54 lbs., the annual cash cost declined by $9000 a year on a herd of 400 cows. “We don’t want to get so wrapped up in chasing premium prices that we forget costs. Selecting cattle for any single trait, whether it’s tenderness, or marbling, or anything else will always lead to genetic problems down the road.” Genetic consultant, Gerald Fry, agreed with Dr. Williams. He said that for tender and highly flavored meat, beef producers should select for small bones and a visually active glandular system. “As you increase frame size you increase bone size and narrow the rump and the rump is high value meat. The rule of thumb is ‘height costs meat’. Taller animals have lower market yields.”

There is no doubt that Murray Greys have what is needed to meet today’s market demands. They are born easily, giving you a live calf that grows well. They are equally efficient in the pasture or the feedlot. They consistently produce quality beef that is tender and grades high. They provide the “right sized” servings for today’s family meal and restaurant trade They are fertile and easily handled, making them profitable in every way. Murray Greys have proven time and again that they truly are the world’s best beef eating experience.